Quilts on the Tay show - special exhibit by SAQA 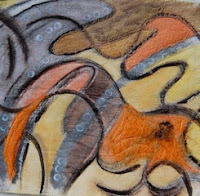 35 pieces by 21 members of SAQA Central Canada were on display at the Lanark County Quilt Show in Perth the weekend of Aug. 12-14th.

Shown above are works by Catherine Timm, Marie France Gosselin and Elaine Quehl.

It was quite an impressive array of beautiful art, showcasing many different techniques.


Helga Zimmerly coordinated this special exhibit and lots of compliments are due to her. Even though she gave us plenty of advance notice, things did not come together until near the time of the show. And once she got to the high school, where the show took place, to mount the exhibit, the organisers had given her a different space, albeit much better. All her advance planning was therefore useless so she and her helpers, Joanne Komendat and Cathy Price (both from the F Squared group) and Lynne Morin, had to start from scratch.

The result was a feast for the eyes! Apparently, there was great interest from visitors to the show.

Because of sudden change of exhibit space, Helga was able to include all the pieces she had received.


Special thanks to Cathy Breedyk Law who was invaluable in collecting and storing the art untile the show. Special mention needs to be made for "Laurentian Foothills" which intrigued many. Many thanks to Helga, Cathy and Lynne for their tremendous effort!